Trinity Lutheran Church was founded on January 12, 1886, when the citizens of the village of Bechtelsville, PA, took action to build a church. Ground was broken on March 27 and the cornerstone was laid on May 16, 1886. One year later, members of Lutheran and Reformed congregations who could not attend their mother churches began worshipping in Trinity Lutheran Church. The church was also used by the Mennonites for worship and funeral services when it was not in use by the other congregation.

On October 10, 1886, the president of the Reading Conference of the Ministerium of Pennsylvania appointed The Reverend Dr. J.J. Kline to serve as Trinity's first pastor. During the early years of ministry, the church saw many changes under the direction of its pastors. In 1911, during Dr. Kline's pastorate, the steeple was struck by lightning and rebuilt. In 1923, a Moller pipe organ was installed during Rev. Wesley E. Wenner's ministry. Rev. George W. Fritch was instrumental in establishing the first youth organization in the late 1920's

On January 5, 1958, the members of Trinity Reformed Church held their last service in the church as the congregation voted to dissolve. In 1959, Trinity and Christ Niantic, who until this time shared a pastor, each decided to call their own. This enabled Trinity to call its eighth pastor, and the first to serve the church exclusively, Rev. Donald B. Landis, in March 1960.

As Trinity began ministry on its own, many changes occured. In 1961, a parish hall was built to meet the growing needs of the congregation, and was dedicated on June 29, 1962. A parsonage was built and was dedicated on August 4, 1966. The following years saw many pastors who served God and God's people faithfully, and as a result, the congregation continued to grow in number as well as their commitment to God.

In 1989, desiring to move forward and prepare for the 21st Century, the members of Trinity approved plans for a new church. This building replaced the old church, which was demolished and provided a new sanctuary with seating for 250, a spacious entrance area, staff offices, a sacristy and a parlor. The bell, steeple and cross from the original church were removed, refurbished, and installed on the new building, providing a link from Trinity's historic past to its promising future. The facility was dedicated on May 3, 1992.

On November 1, 1998, Trinity called its current pastor, Rev. Eugene C. Zaiser, who began his service in 1999. Today, in the 135th year of ministry, Trinity Evangelical Lutheran Church continues to be the center of activities for the church and the community at large, and remains commited to spreading the good news of Jesus Christ, our crucified and risen Lord. 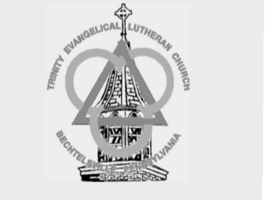 Trinity’s Sunday School is held 9:15-10:15. The Adult Class meets in the parlor and the youth meet in the downstairs classrooms. Please join us!

We shall, as individuals and as a congregation, strive through word, worship, and witness to further the kingdom of God by knowing and sharing Christ's Love in our hearts, in our homes, in His church, in the community, and in the world.﻿

Order forms can be downloaded here.

Thank you for your support of our ministry at Trinity. Please consider making a financial contribution to the life and mission of our congregation.

A pair of pajamas is safe and

Our Mission is to provide

pajamas to children in need.

is in our narthex.